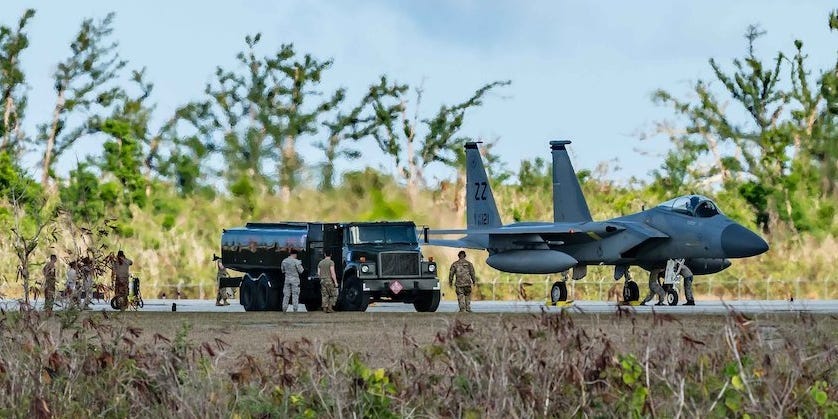 China’s growing arsenal of long-range strike weapons has led the US Air Force to seek out more operating locations in the Pacific that would allow it to scatter its forces rather than concentrate them and create a bigger target.

But as the service expands where it operates, officials say there’s an increasingly urgent need to come up with ways to defend its new bases and facilities.

Bases the Air Force has long used in Europe and the Western Pacific are “generally fixed” and “vulnerable to potential attackers who already know where they are,” Air Force Secretary Frank Kendall, the service’s top civilian official, said at the Center for a New American Security this month.

Kendall said he is focused on China, which has noticed that the US has been dependent on “a small number of assets, including forward air bases, to conduct operations,” Kendall said. “Because they’re fixed, they’re easily targetable,” and China has “built the assets to come after them.”

“We have got to respond to that, and I’ve tried to instill within the whole department a sense of urgency about all of this,” Kendall added.

Chinese military writings have framed “logistics and power projection assets as potential vulnerabilities in modern warfare,” the Pentagon said its most recent report on China’s military.

That thinking aligns with China’s “expanding ability to conduct strikes against regional air bases, logistics and port facilities, communications, and other ground-based infrastructure,” the report said.

China’s ballistic missiles can reach targets in the first island chain, including US bases in Japan, and as far away as the Indian Ocean.

Air- and sea-launched cruise missiles can reach the second island chain, which includes US bases on Guam. According to the Pentagon report, Chinese bomber flights into the Western Pacific are meant to demonstrate that capability.

China is also developing hypersonic weapons that will be harder for missile defenses to intercept while investing in reconnaissance, command-and-control, and communications capabilities to guide all of these weapons to their targets more effectively.

In comments this month and in December, Kendall emphasized the need for a mix of defenses, including active defense systems and passive defenses, such as camouflage and dispersing aircraft.

Guam has been a focus of efforts to bolster defenses in the region. The island is home to Air Force, Navy, and Marine Corps bases, and US Indo-Pacific Command officials say fielding a “360-degree” air-defense system there is a priority.

The Terminal High Altitude Area Defense system has been deployed to Guam, and officials say Patriot air-defense systems could be moved there quickly. Soldiers in Guam recently tested the Iron Dome system there, which “validated” its role in “a layered defense,” the commander overseeing the test said.

The Air Force has also adopted more passive defenses, which are meant to make it harder for adversaries to find and attack friendly forces.

It is building and hardening facilities in Guam and at other bases, and it has embraced a concept known as agile combat employment to more effectively disperse its forces, pairing larger “hub” bases with smaller, less developed “spoke” bases from which aircraft could operate for days or weeks at a time.

Indo-Pacific Command’s Air Force component, Pacific Air Forces, has scoured the region for potential “spokes” and is spending more time at them. US officials have promised more investment in other facilities and rotations at other bases, including in northern Australia.

ACE “is the right concept,” but it’s only part of the solution, Kendall said this month. “We have to figure out exactly what investments we need to make in the mix of defenses: hardening, deception, and proliferation.”

“The current systems that we have, like Patriot and THAAD and Iron Dome and some others, [are] really heavy, not agile,” and require transport by large cargo planes and ships, Wilsbach said at the Air Force Association conference in September.

What is needed is “probably a directed-energy type of weapon that can work against cruise missiles and bombs and aircraft and ballistic missiles as well as hypersonics and maneuvering vehicles,” Wilsbach said, describing it as “a super-high-end base-defense system, but it’s got to be small and agile.”

Wilsbach said he has discussed such systems with the US defense industry, but new technologies will take time to develop. Congress did allot more money for military infrastructure in the Pacific in the latest defense budget, though much of it was dedicated to projects at major US bases.

In his comments this month, Kendall said that countering China’s ability to disrupt the Air Force’s operations was “probably the most immediate task” among his top priorities.

“These problems, they’re already upon us,” Kendall said. “We have to have some level of defenses so that [an adversary] has uncertainly about how successful his attack might be, and we have to basically change the equation fundamentally in terms of how much leverage there is in shutting down air bases.”