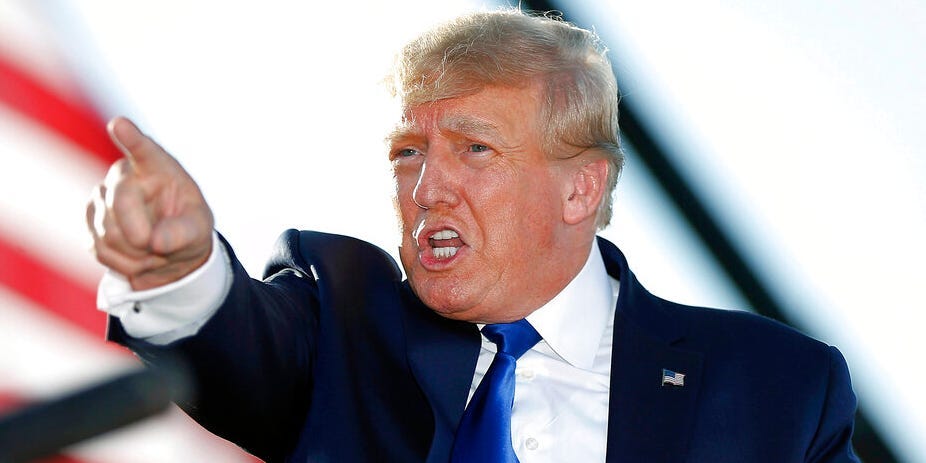 Former President Donald Trump took Truth Social to his social media platform over the weekend to lash out at the FBI over its raid of Mar-a-Lago.

In a stream of messages, Trump complained that the FBI searched the house, including his wife Melania Trump’s closets, “alone and unchecked.”

He also repeated the baseless allegation that the FBI could have planted evidence at Mar-a-Lago: “There was no way of knowing if what they took was legitimate, or was there a “plant?”

The FBI raided Trump’s Mar-a-Lago residence in Florida to investigate whether he mishandled government records by taking them from the White House.

The Department of Justice is investigating whether Trump broke three laws, including the Espionage Act, according to the warrant unsealed on Friday. The warrant included a complete inventory of seized items.

Trump’s defense over the records found at Mar-a-Lago has repeatedly changed, from suggesting evidence was planted, to falsely accusing former President Barack Obama of doing the same to claiming that everyone “brings home their work from time to time.”

Along with several messages he wrote, Trump reposted over a dozen messages from supporters.

Some of the accounts he reposted had names with references to QAnon or the alt-right and pointed to debunked conspiracy theories about the FBI.

One of the accounts was called “WWG1WGA”, an abbreviation of the phrase “where we go one, we go all,” which is a popular QAnon tagline and slogan.

Trump reposted another message from an account called “We The Pepe,” a meme of a green frog that has been branded a “hate symbol” by the Anti-Defamation League for its links to online racism, anti-Semitism, and the alt-right.

The posts generally featured screenshots of Tweets or memes in support of Trump and criticizing the FBI.

Trump also reposted an image that listed various alleged wrongdoings by the FBI, including baseless conspiracy theories about the Gretchen Whitmer kidnap plot being fake and allegations that FBI informants participated in the Capitol riot. It is not the first time Trump has referenced these conspiracy theories.

Many of the posts were shared by Trump within an hour, which hints at the former president’s current state of mind.

Sources told The Washington Post that Trump appeared to be “upbeat” immediately after the FBI search, as he believed the raid would cause Republicans to rally around him.

However, when it was revealed that the FBI had seized 11 sets of classified documents, among other things, those defending him became more muted.

Following this, Trump’s buoyant mood at times turned dark, according to people who had been around him, The Post reported.