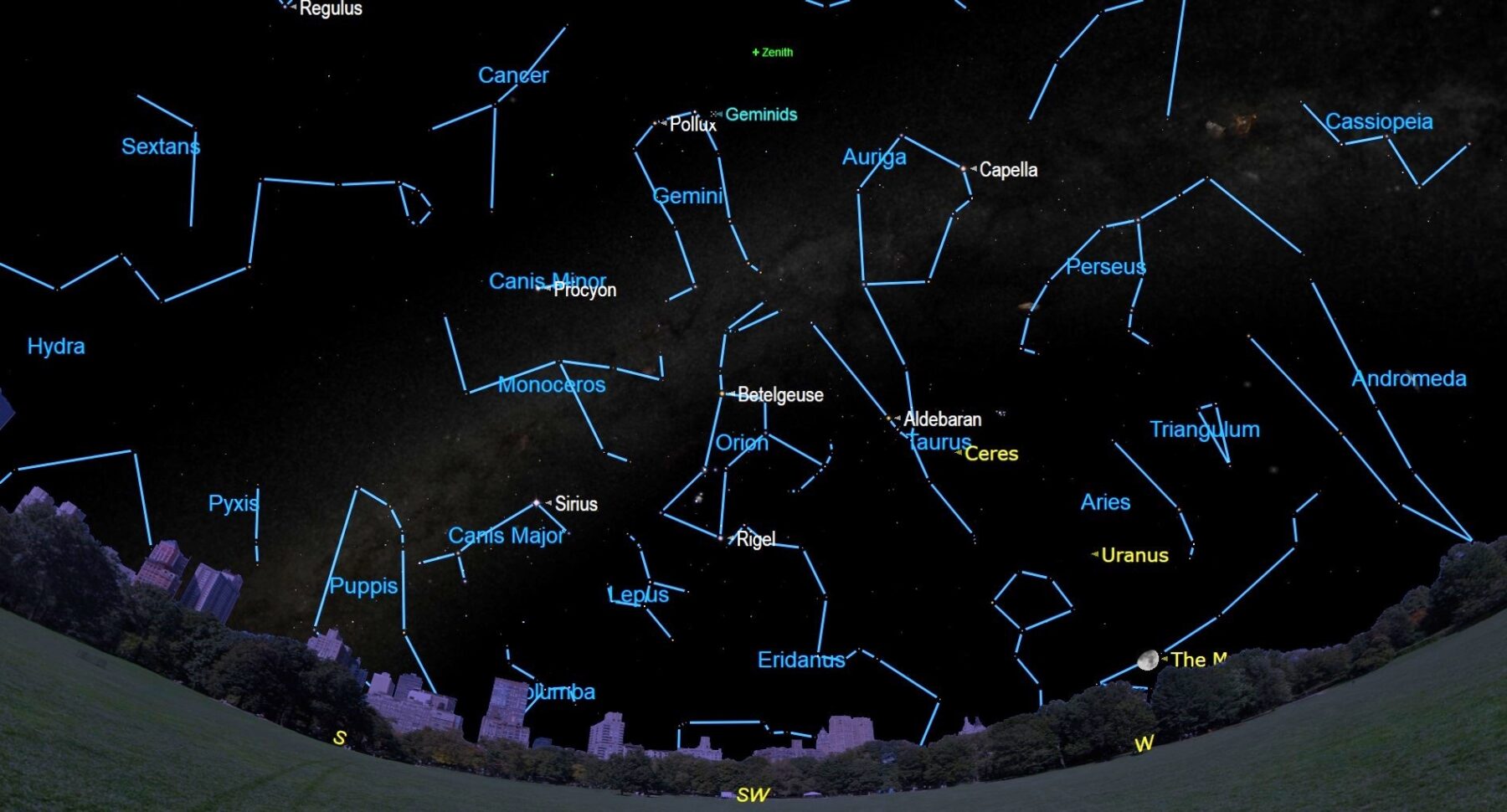 The Geminids meteor shower, usually one of the most spectacular showers of the year, runs from November 19 to December 24 annually. The number of meteors will gradually ramp up to a peak during the wee hours of Tuesday, December 14, and then decline rapidly on the following nights. Geminids meteors are often bright, intensely coloured, and slower moving than average because they are produced by sand-sized grains dropped by an asteroid designated 3200 Phaethon. You can watch for Geminids once the sky darkens on Monday evening, until dawn on Tuesday morning. At about 2 a.m. local time, up to 120 meteors per hour are possible under dark sky conditions. At that time the sky overhead will be pointed toward the densest part of the debris field. True Geminids will appear to radiate from a position above the bright stars Castor and Pollux, but the meteors can appear anywhere in the sky. Until after it sets, at around 3 a.m. local time, a bright waxing gibbous Moon on the peak night will spoil this year’s shower.

In the eastern sky after dusk on Wednesday night, December 15, the very bright, nearly-full Moon will shine almost a fist’s width to the lower left (or 8 degrees to the celestial east) of the magnitude 5.7 planet Uranus. By dawn on Thursday morning, the Moon’s orbital motion will carry it farther from Uranus in the western sky, and the diurnal rotation of the sky will move it to the upper left of the planet. While Uranus’ blue-green dot can normally be seen in binoculars (green circle), I recommend noting its location between the brighter stars of Aries and Cetus, and the nearby stars Mu and Xi Ceti, and seeking it out a few nights later, when the bright Moon will have moved away.

As darkness falls on Thursday, December 16, look in the eastern sky for the bright gibbous Moon shining among the stars of Taurus. The bright open star cluster known as the Pleiades and Messier 45 will be positioned within a binoculars’ field of view above (celestial north of) the Moon. Scan your binoculars below (south of) the Moon to see the bright star Aldebaran at the corner of the V-shaped stars that form the face of the bull. Those stars, known as the Hyades Cluster and Caldwell 41, are one of the closest open star clusters to Earth.

Friday, December 17 – Venus closest to Saturn and Jupiter (after sunset)

On the evenings around Friday, December 17, the planet Venus will reach its minimum angular separation from Jupiter and Saturn. Those three bright planets will share the southwestern sky after dusk – with bright Venus gleaming 31 degrees to the lower right (celestial west) of Jupiter, and somewhat fainter Saturn positioned midway between them. After tonight, Venus will swing sunward and pull away from Jupiter and Saturn.

The prominent crater Copernicus is located in eastern Oceanus Procellarum — due south of Mare Imbrium and slightly northwest of the Moon’s centre. This 800 million year old impact scar is visible with unaided eyes and binoculars — but telescope views will reveal many more interesting aspects of lunar geology. Several nights before the Moon reaches its full phase, Copernicus exhibits heavily terraced edges (due to slumping), an extensive ejecta blanket outside the crater rim, a complex central peak, and both smooth and rough terrain on the crater’s floor. Around full Moon, Copernicus’ ray system, extending 500 miles (800 km) in all directions, becomes prominent. Use high magnification to look around Copernicus for small craters with bright floors and black haloes – impacts through Copernicus’ white ejecta that excavated dark Oceanus Procellarum basalt and even deeper highlands anorthosite.

The December full Moon will occur at 04:35 GMT on Sunday, December 19, which converts to 11:35 p.m. EST on Saturday evening. Traditionally known as the Oak Moon, Cold Moon, and Long Nights Moon, it always shines in or near the stars of Gemini. The Ojibwe of the Great Lakes region call the December full Moon Manidoo Giizisoons, the “Little Spirit Moon”. For them it is a time of purification and of healing of all Creation. Since it’s opposite the Sun on this day of the lunar month, the Moon is fully illuminated and rises at sunset and sets at sunrise. Full moons during the winter months reach as high in the sky at midnight as the summer noonday Sun, and cast similar shadows.

Chris Vaughan is a science writer, geophysicist, astronomer, planetary scientist and an “outreach RASCal.” He writes Astronomy Skylights, and you can follow him on Twitter at @astrogeoguy. He can also bring his Digital Starlab portable inflatable planetarium to your school or other daytime or evening event. Contact him through AstroGeo.ca to tour the Universe together.