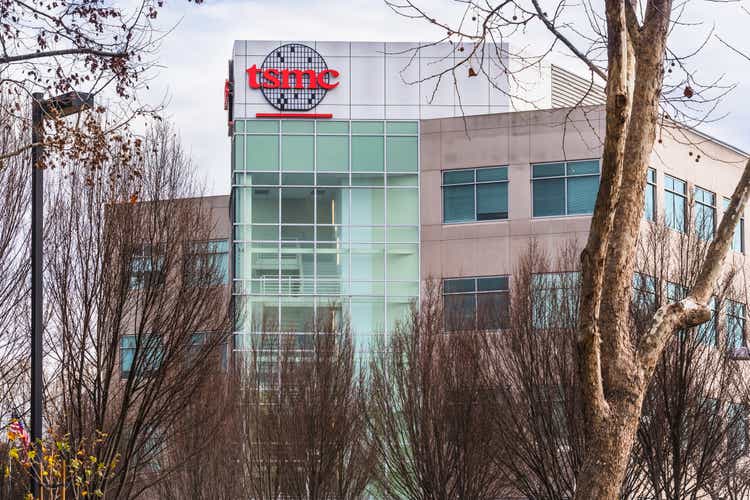 TSM (NYSE:TSM) is in the ARM Portfolio at Long View Capital, and until January, it had been badly underperforming the rest of the portfolio and the semi index. Since our October 2021 launch:

The reason is right there in the name: Taiwan Semiconductor. For about a year or more now, when I bring up TSM, I am often told that it is uninvestable because of US-China tensions. I patiently explain that Taiwan is the Republic of China, not the People’s Republic. Then I am frequently told that China will either invade Taiwan, or nationalize TSM’s factories on the mainland. We’ll talk about these risks in a bit.

The whole semi sector got rocked in January. TSM had a surge at their earnings report two weeks ago, because the news was too good to ignore, but when there is a riptide, everyone is headed out to sea.

TSM is the largest and best semiconductor contract manufacturer, AKA “foundry” or “fab”. All they do is take designs from other “fabless” chip companies like Apple (NASDAQ:AAPL), Qualcomm (NASDAQ:QCOM) and Nvidia (NASDAQ:NVDA), and turn them into chips. They dominate the top end, where the high margins are.

What you see, roughly, are the three levels of the fab business. In Q4, 50% of TSM’s revenue was from their two top end fabrication “nodes,” where the highest prices and margins are. UMC (NYSE:UMC) is another Taiwanese company that does mid and low level fabrication (and very well). GLOBALFOUNDRIES (NASDAQ:GFS) is at the bottom. The chip shortage is located in the mid and lower end nodes, and you see how margins have risen for the latter two in that environment.

ASML makes the extreme ultraviolet lithography, or EUV machine that saved Moore’s Law. Moore’s Law is not a law, but a prediction by one of Intel’s founders in 1975 that the transistor density on silicon chips would double every 2 years on average through 1985.

This actually held up past 1985 until 2009. The dashed line is at the 41.2% annualized growth implied by Moore’s Law. The decline from 2009 to 2018 is basically Intel (NASDAQ:INTC) dropping the ball, because they were the ones driving growth before that. So what happened in 2018 that started turning that around?

What happened was that after three years of messing around with them on test lines, TSM began incorporating ASML’s EUV machines in their top end node, and used it in more of the process in the subsequent node. Future transistor density gains will come from using it in more of the lithography process.

This is a massive machine that comes with its own stairs.

They cost over $100 million apiece and have to be broken into three parts to fit in a 747 cargo jet, and then reassembled on site, which is what you are seeing in that photo. There are only about 125-130 of them in the world, and TSM owns 75-80 of them.

That pie chart shows TSM’s nodes, and I’ve noted which Apple chips are made on them for reference. The A and M-series run iPhone, iPad and Mac, the S-series is in Watch, and the U1 chip enables AirTags and other features. The nanometer labels no longer have any meaning in relation to the unit of measurement, but lower is better. The first thing to note is the ASML Line which divides the nodes that use EUV and the nodes that don’t. Any fab that doesn’t invest heavily in this machine is stuck in 2018 forever. That is why there are only three: TSM, Samsung, and now Intel.

But there is plenty of action in the low and mid slices of the pie, especially now, because that’s where the chip shortage is. It is also the part of the business that collapses first in a downcycle. The 28nm node is exceptionally busy now, and this is a crowded space at all foundries. The big driver of that is digital camera chips that turn light into digital data.

The high end nodes, 5 and 7 nm, are lower volume, but much higher margin. Once those nodes mature (18-24 months after launch), they get something approaching a 60% gross margin until they are replaced with a new top node. That’s where we’re at with 5nm right now — ramp completed. As you go around that pie chart clockwise from 5nm, the margin declines because they face more competition and price pressure. That’s why being at the top is so important.

Let’s talk about their other bestie, Apple. TSM’s strategy is to work very closely with customers to get them exactly what they want in future nodes, and Apple has been driving TSM for years now. It is sort of the perfect marriage. Having Apple as a customer is a blessing and a curse. Everyone loves the money of course, but Apple expects a lot of all that money. This is the company that went through three general contractors when building Apple Park. They exert an extraordinary level of control over every detail, and make demands that no one else does. Not everyone is up for being “insanely great” 100% of the time, but TSM is.

So having Apple as their best customer has really pushed TSM, probably much farther that they would have gone with another main customer. But Apple’s scale also brings a problem. They have dominated the 5 nm node for almost two years now, and other customers, notably Qualcomm and AMD (NASDAQ:AMD), have gotten tired of waiting for Apple to finish up. Qualcomm first, they have jumped to Samsung’s inferior 5 nm node, because at least they can get on it. We’ll talk about how TSM aims to win them back in a bit.

So what cued this up?

TSM reports monthly metrics, so after hours on Monday, we already knew Q4 was going to come in hot, capping a hot 2021. I guess in the general discord of the week, people missed the news, and you see what happened after reporting on Wednesday after hours. Since then it has come way back with the rest of the sector.

Those growth rates in revenue and EBT should rise to mid-20s in 2022. I circled the bad stuff in the right-hand column. Starting with the margins:

I backed out a few years so you can see the two things that depress their gross margins: a semi downcycle, and ramping a new top-end node. They will have a higher gross margin in 2022, above 53%, but they will begin ramping new nodes at the end of the year, so that will depress them in 2023 a bit. It takes about 6-8 quarters to fully ramp production on a new node.

The other red circle in the table is in free cash flow. That negative growth number is entirely the result of the big positive number just above it for CapEx, which is subtracted from free cash flow. They did $30 billion CapEx in 2021, guided to $40-$44 billion in 2022, and $125 billion in 2022-2024. Apple and others chipped in for $7 billion in prepayments in 2021 to help pay for all this expansion, and that will rise in 2022. Let’s talk about the CapEx, and what they are spending all that coin on.

I keep saying it, but just for completeness sake: 2021 was the beginning of the biggest semi CapEx upcycle in history and nothing comes particularly close. We have no precedent for this. Just from TSM’s side of things, 2021 saw a 65% rise in CapEx, and the midpoint of their guidance is another 40% YoY rise in 2022. I think it will sit at around $40-$45 billion in 2023 and 2024, given current guidance, and total around $125 billion for the three years.

But they are not the only ones. In their high end competition, Samsung and Intel will probably spend a little less than that between the two of them, something like $80-$100 billion over three years. The US and EU governments are likely to chip in for Intel. And that’s just the three at the top. The only important semi manufacturing company not engaging in this binge in CapEx is Texas Instruments (NASDAQ:TXN).

So what exactly is TSM building with all this money? Like many big Asian industrial companies, they are very controlled in their messaging, so we don’t have a ton of information to go on. Here’s what we know:

That’s all we know, unfortunately. Let’s look at the new nodes, and who they are geared towards.

These dates are not written in stone, and there are frequently delays. However, this schedule keeps them a year ahead of second place Samsung. Intel says that they can get to only a year behind by 2025, but I think that’s overly optimistic given the high hurdles they have ahead of them. Complicating all this is that Intel may increase their use of TSM nodes while they catch up, so they may also be getting in on N4X with Nvidia and maybe AMD.

So even though projections from their customers are for mid-teens unit growth in 2022 and 2023, TSM’s revenue growth looks to be in the mid or high 20s, and that’s because of those very high margin nodes at 7nm and below. This is a common pattern for TSM. For example, last year smartphone unit sales were up 6%, but TSM’s smartphone end market revenue was up 8%.

This flood of CapEx is also a message to Samsung and Intel: “You think you can catch up? Try and compete with this.”

There has been a lot of alarmism surrounding this lately that I believe is unwarranted. Successive US presidents have all made clear that invading Taiwan starts World War III, and that’s not something China either wants or thinks they need. They think they are winning this competition without resorting to war, and that time is on their side. Whether they are right or not is to be seen, but it also means time is on our side with TSM. I view the probability of China invading Taiwan absent a hot war already in progress as something close to zero.

In terms of nationalizing TSM’s Chinese factories, this is another sort of nuclear option that would only come into play if things had already deteriorated considerably, but it is a larger risk than the Chinese invasion scenario.

This is a much more real risk that requires much less imagination. The semiconductor business has always been very cyclical, and downcycles often come suddenly and with very little warning if you are not paying attention. The last time that happened was H2 2018 through the beginning of the pandemic. H1 2018 was red hot, and then consumer demand collapsed.

But this is the biggest upcycle in history, without precedent. Let’s look at what is driving this:

There are those who say the cycle will not end because of those second two bullets, but my take is the same as every cycle: it is dependent on durable goods demand remaining hot. The history of that is that surges in durables demand do not persist, though the pandemic remains a complicating factor now. Let’s look at what happened to TSM in the 2018-2019 downturn:

Revenue stayed up at first as they cleared out orders from H1 2018, but margins thinned. By mid 2019 they were in the thick of it, and those are some pretty big declines. Like many others, TSM had to idle capacity in their mid and low end nodes. The 28nm node, which is so crowded right now, saw particular overcapacity then.

Because of their greater reliance on the high end now versus 2018-2019, TSM will see less problems than other semi companies generally, and other fabs in particular. But they will still see problems and a share price decline. I will be looking for steep declines in durables consumption, and rising inventories as indicators of when this cycle ends.

Semiconductor fabrication uses a lot of water, and Taiwan has been experiencing recurrent droughts. This could morph into a big issue.

The environment at the moment is not friendly to any sector outside of energy and consumer staples, and I believe we have more turbulence coming until we see the first rate hike in March. But sentiment aside, TSM’s 2022 is shaping up to be another blockbuster.