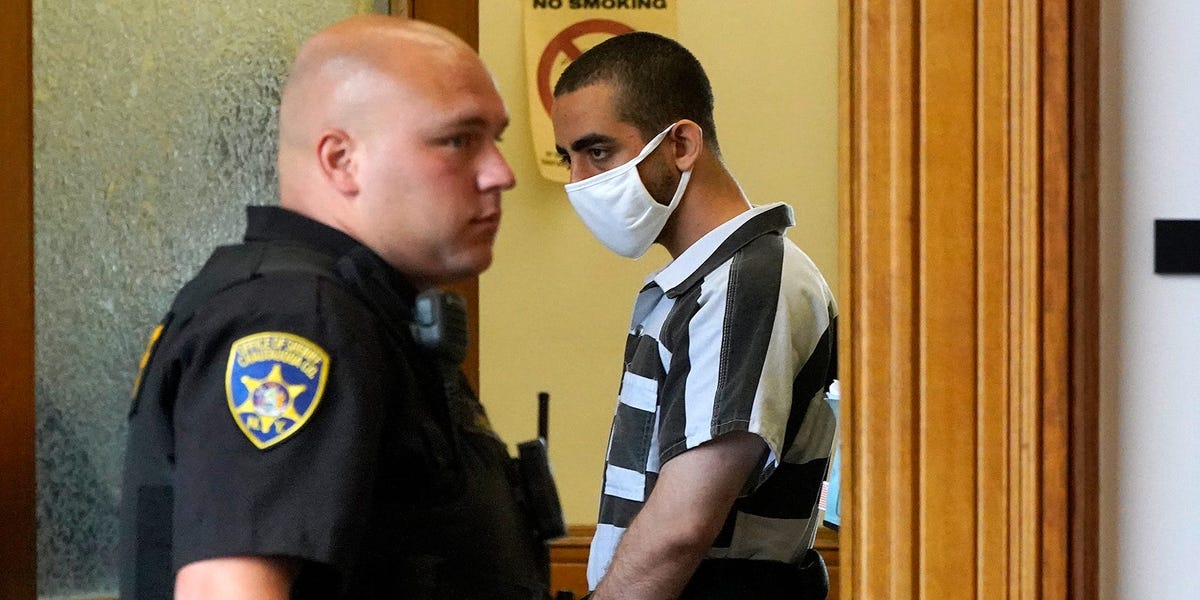 Hadi Matar, the 24-year-old accused of stabbing author Salman Rushdie on Friday, pled not guilty to charges of attempted murder and assault with a weapon during his arraignment on Saturday.

Rushdie was stabbed roughly 10 times on Friday as he was taking the stage to deliver a lecture in what prosecutors called a premeditated and targeted attack, The New York Times reported.

The 75-year-old writer’s injuries included three stab wounds his neck and four to his stomach, puncture wounds to his right eye and chest, as well as a laceration on his right thigh, CNN reported Chautauqua County District Attorney Jason Schmidt said during Matar’s arraignment.

On Friday, Rushdie’s agent, Andrew Wylie told The New York Times: “The news is not good. Salman will likely lose one eye; the nerves in his arm were severed; and his liver was stabbed and damaged.”

Matar, a New Jersey resident and US citizen, was carrying two fake IDs when he was arrested, The New York Times reported. He was represented by a public defender and was denied bail after entering his not guilty plea.

CNN reported Matar did not speak during his arraignment, though his lawyer said he was being “cooperative.” Matar’s next court appearance is scheduled for August 19 at 3 p.m.

President Joe Biden on Saturday issued a statement saying that he and the first lady, Jill, were “shocked and saddened” by the “vicious” attack.

“Salman Rushdie—with his insight into humanity, with his unmatched sense for story, with his refusal to be intimidated or silenced—stands for essential, universal ideals,” Biden’s statement read. “Truth. Courage. Resilience. The ability to share ideas without fear. These are the building blocks of any free and open society. And today, we reaffirm our commitment to those deeply American values in solidarity with Rushdie and all those who stand for freedom of expression.”

“The Satantic Verses” author has faced death threats over his controversial writings since the novel, which was inspired by the life of the Islamic prophet Muhammad, was published in 1988.

In 1989, Iranian cleric Ayatollah Khomeini issued a fatwa calling for Rushdie’s assassination, claiming the book was “against Islam, the Prophet, and the Koran.”

A motive for the attack is not yet clear, The New York State Police said at a news conference on Friday.