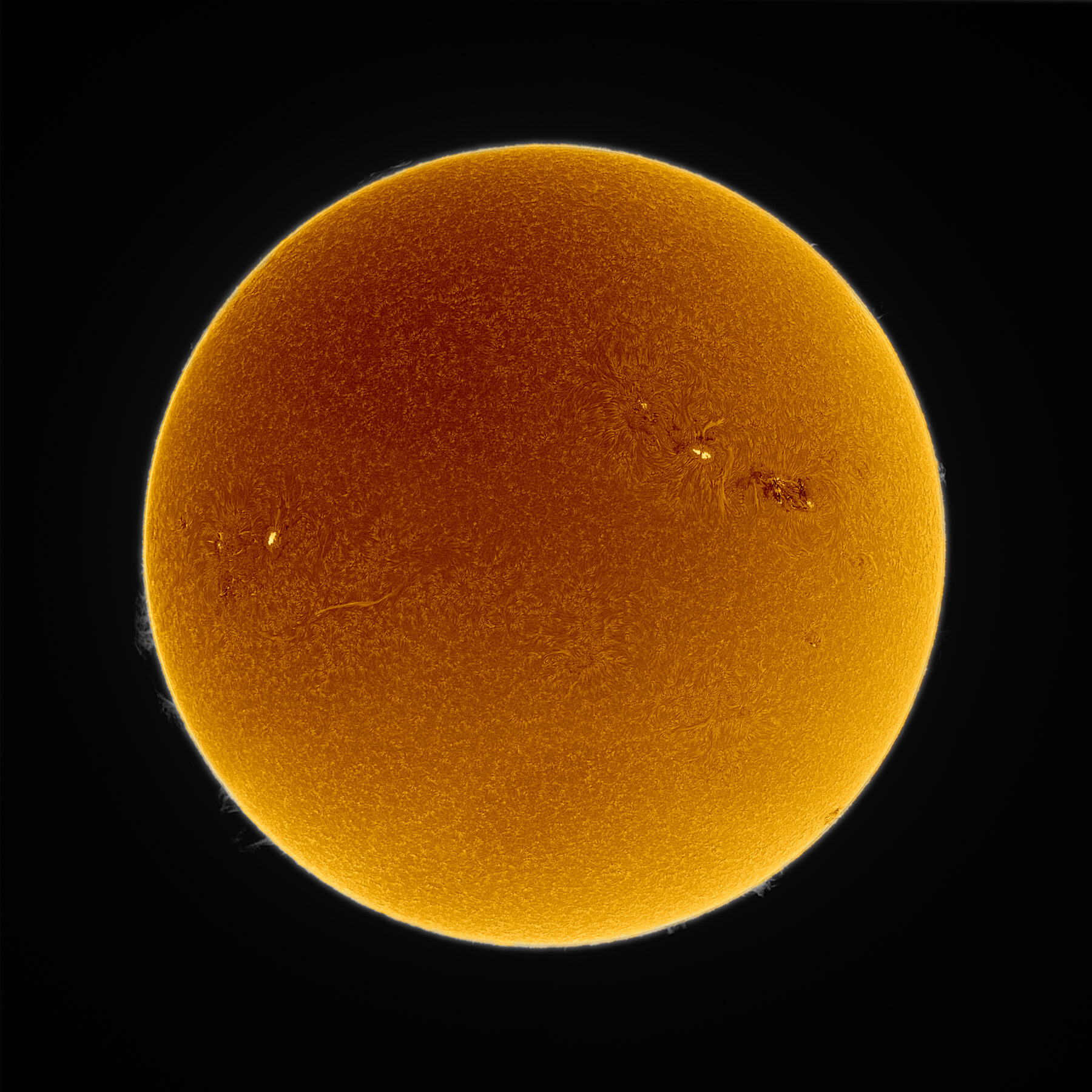 Showing our closest star with incredible clarity, Daniel Borcard is the Photo of the Week winner on April 22, 2022, with his picture of the Sun, featuring sunspots and its “boiling chromosphere.”

This image is a mosaic of four images taken through a Lunt LS60T Hydrogen-alpha refractor, riding on an iOptron iEQ30 mount and a Point Grey (now FLIR) Grasshopper 3 camera with a 2× TeleVue Barlow lens.

“As usual, I inverted and colourized the surface to make the details more apparent, but I left the prominences in grayscale and not inverted.”

Borcard said he elected to image both the chromosphere in Hα light and the most prominent sunspots of the photosphere in continuum light. He said the image was taken on March 30, 2022, at 10:30 a.m. EDT.

“The views of the boiling chromosphere were absolutely impressive, even with this modest refractor,” he said. “I hope that we will enjoy more of the same amount of activity in the near future!”

Bruce Murray’s image of Messier 33 — which exposes occasional individual stars and Hydrogen-alpha hotspots — is the runner up this week.

Also known as the Triangulum Galaxy, Messier 33 is the third-largest member of our Local Group of galaxies following the Andromeda Galaxy (M31) and the Milky Way. Located about three million light-years from Earth, M33 is a suspected gravitational companion to Andromeda. NASA states that both galaxies are moving toward us, and M33 could become a third party involved in the impending collision between the Andromeda and Milky Way galaxies more than four billion years from now.

Murray, a member of RASC’s Hamilton Centre, collected the data for the image November 3 and 4, 2021, from his cottage in South Frontenac, Ontario. He used a ZWO ASI2600MC Pro cooled to -10 C, an Explore Scientific FCD100 127mm carbon fibre (focal length 952mm) on an iOptron CEM70. He captured 32 exposures of 300 seconds each using a QUAD Band Pass filter in Hydrogen-alpha, Hydrogen-beta, Sulphur and Oxygen III, and 39 exposures of 300 seconds each with an IDAS-P2 filter.

Every week, SkyNews publishes the best image from among those sent in by readers from all across Canada. Whether you’re an expert or a beginner at night sky photography, we’re looking for your pictures! Enter today for your chance to win a Photo of the Week title and one of our annual prizes!

Prizes for the 2021-22 SkyNews Photo of the Week contest are sponsored by Sky-Watcher, Celestron, iOptron, The Royal Astronomical Society of Canada and SkyNews. Find out more about the amazing telescopes, prize packages and gift vouchers awarded to the best photos this year.