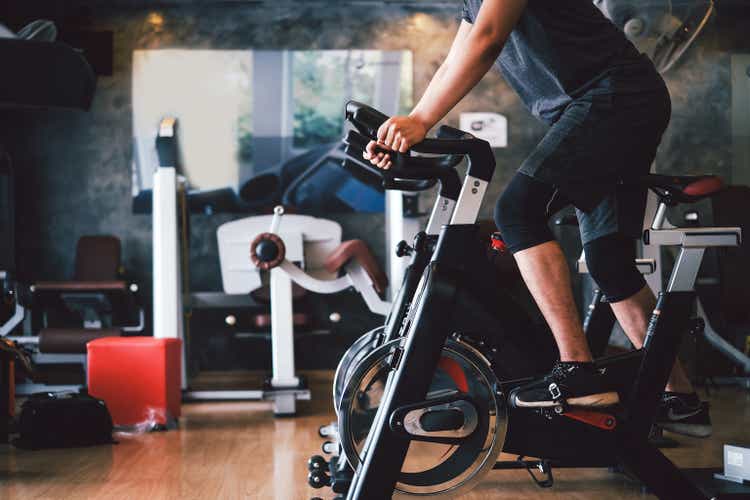 I still have a Hold investment rating for Peloton Interactive, Inc.’s (NASDAQ:PTON) shares. In my earlier February 3, 2022 update for PTON, I touched on reasons for “the company’s stock price fall since the start of November 2021.”

My current article focuses on what is in store for Peloton in 2022. PTON’s FY 2022 (YE June 30) revenue and EBITDA guidance didn’t live up to market expectations, but the company could potentially generate positive EBITDA again by FY 2023 (2H 2022-1H 2023 in calendar year terms), assuming that its plans to reduce operating expenses work out well. All eyes are also on Peloton’s experiment with its pricing strategy, but I have a mixed view of how this could pan out for the company in 2022.

In a nutshell, Peloton is expected to witness an improvement in its profitability at the EBITDA level by the second half of 2022 (calendar year), but it is uncertain how PTON’s new pricing strategy (assuming full implementation) will affect its subscriber growth and revenue this year. Considering that PTON’s forward EV/EBITDA valuations appear to be fair, I maintain a Hold rating for Peloton.

Peloton’s key financial and operating metrics for the second quarter of fiscal 2022 as disclosed in its quarterly shareholder letter largely met market expectations.

PTON’s most recent quarterly revenue of $1,134 million was in line with its preliminary Q2 revenue estimate of $1.14 billion and the market consensus’ top line forecast of $1,137 million (as per S&P Capital IQ data). Peloton’s Q2 FY 2022 non-GAAP adjusted EBITDA of -$267 million was largely aligned with the company’s preliminary EBITDA losses forecast in the -$260-$270 million range, and this was +7% better than the Wall Street’s consensus estimate of -$287 million. The company’s 2.77 million Connected Fitness Subscriptions as of end-2Q FY 2022 was the same as what it disclosed as part of its second-quarter preliminary financial results, and this figure was within the market’s expectations (consensus forecast was 2.78 million).

But PTON’s full-year FY 2022 management guidance was disappointing. As per its Q2 FY 2022 shareholder letter, Peloton guided for the company to deliver $3.7-$3.8 billion of revenue, and adjusted EBITDA losses between -$625 million and -$675 million. In comparison, the Wall Street analysts’ consensus full-year FY 2022 top line and non-GAAP EBITDA estimates prior to Peloton’s recent quarterly earnings announcement were $4.2 billion and -$524 million, respectively according to sell-side financial forecasts obtained from S&P Capital IQ data.

On the flip side, there is a path for the company to return to profitability (at the EBITDA level).

At the company’s Q2 FY 2022 earnings briefing, Peloton guided that “we expect our restructuring efforts to generate at least $800 million in run rate savings by fiscal 2024” of which “the majority of OpEx savings ($500 million of the $800 million)” is expected to “benefit (PTON in) fiscal 2023.” Sell-side consensus forecasts (as per S&P Capital IQ data) point to Peloton turning around from an EBITDA loss of -$646 million in fiscal 2022 to generate positive EBITDA of +$50 million and +$367 million for FY 2023 and FY 2024, respectively.

In summary, the key metrics highlighted in this section suggest that Peloton’s top line expansion will be more modest in a post-pandemic environment, although the company is likely to be profitable again at the EBITDA level assuming that its planned cost cutting initiatives are successful.

Is Peloton Stock At Fair Valuation?

Peloton’s shares have underperformed significantly in the last six months as indicated in the chart below, which makes sense to review its current valuations to see if they are fair.

PTON’s Stock Price Performance In The Past Six Months

I am of the view that Peloton is currently at fair valuation, instead of being overvalued or undervalued.

Is PTON A Good Investment Today?

In determining if PTON is a good investment today, there are two key questions to ask. Firstly, can Peloton retain existing subscribers? Secondly, is it possible for PTON to attract new subscribers in a meaningful way?

On the first question, there have always been worries that PTON’s existing subscribers could eventually switch to other at-home fitness subscription products and services. But two key operating metrics suggests such concerns are overdone.

In its Q2 FY 2022 shareholder letter, Peloton revealed that its “Q2 Average Net Monthly Connected Fitness Churn was 0.79%”, while its “Q2 12-month retention rate was 92%.” In other words, Peloton continues to retain the vast majority of subscribers it gained during the pandemic; its Connected Fitness Subscriptions rose from 886,000 as of the end of March 2020 to 2,767,000 as of the recent end-Q2 FY 2022.

With respect to the second question, I noted in my prior December 27, 2021 article for Peloton that “a research study done in July 2020 indicated that the company’s Total Addressable Market or TAM was 75 million households.” As a comparison, Peloton expects to have 3.0 million Connected Fitness Subscriptions as of the end of June 30, 2022, and this is a mere 4% of PTON’s TAM.

But it could take a much longer time for Peloton to achieve a higher penetration rate of its TAM, as the economy reopens and more consumers return to gyms. A recent March 17, 2022 article published by market intelligence agency Mintel cited a survey which found that “just 15% of exercisers feel that digital fitness platforms have eliminated the need for gyms, signifying that in-person fitness will rebound.” The results of the survey are aligned with expectations of more modest revenue growth for PTON in the next few years as per the company’s +18% FY 2024-2026 revenue CAGR I highlighted above.

In conclusion, Peloton is not exactly a good investment today, since it seems unlikely that at-home fitness will be able to displace in-person fitness in a significant way in the short to intermediate term.

There is great uncertainty over how Peloton’s shares will perform this year. A key factor is how consumers respond to PTON’s new pricing model introduced by the company’s newly appointed CEO.

On February 8, 2022, Peloton announced that “Barry McCarthy, who has held senior leadership roles at Spotify (SPOT) and Netflix (NFLX)” was named the new CEO for the company. A month later, Seeking Alpha News cited a Wall Street Journal article which highlighted that “a new pricing system starts being tested on March 11 under which customers pay a single monthly fee ($60-100 versus PTON’s current $39 subscription fees) that covers both the stationary bike and a monthly subscription to workout courses.” This represents a major shift for Peloton as it tries to move away from fitness equipment sales to focus more on subscriptions.

On the positive side of things, this lowers the entry barrier for people who had always been interested in signing up for Peloton’s subscriptions and courses, but were put off by the high initial costs of PTON’s fitness equipment. Instead of spending a few thousand dollars to buy a bike or treadmill from Peloton, they will not be committing more than a few hundred dollars if they want to try out PTON’s subscription program for a couple of months.

In addition, there has always been a ceiling or cap on PTON’s valuations, as investors tend to assign a lower valuation multiple to the company’s revenue stream from fitness equipment sales (vis-a-vis subscription fees). Looking ahead, a shift in mix towards subscriptions and a pivot towards an asset-light model in the future could help to bring about a positive re-rating of Peloton’s valuations.

On the negative side of things, PTON will not be able to leverage on high switching costs linked to the initial outlay for the fitness devices and rely on the cash flow from such sales to finance its future investments, if there is a permanent change to its pricing approach.

A February 16, 2022 Financial Times article titled “Inside Peloton’s epic run of bungled calls and bad luck” referred to PTON’s bikes as “commitment devices” whose “high upfront cost inducing guilt about skipping workouts.” If consumers don’t spend a few thousand dollars on buying Peloton’s bikes, it might be easier (from a psychological perspective) for them to cancel their monthly subscriptions later if and when they lose interest.

Also, in the Wall Street Journal article that was referred to earlier, one of the sell-side analysts highlighted that “equipment sales have funded Peloton’s ballooning marketing spending up until now.” This suggests that PTON will have to sign up a whole lot more subscribers (even at the relatively higher subscription price) to make up for the loss of fitness equipment sales as part of the new pricing bundle.

It is important to note that PTON’s new pricing model is only in the testing phase for a certain period of time and in specific store locations. But Peloton’s 2022 stock price performance is likely to be heavily influenced by the initial feedback and response from consumers with respect to this change in pricing model. As it stands now, I think PTON’s shares will trade sideways or be range-bound until the market is able to assess the effects of the company’s recent pricing move.

Is PTON Stock A Buy, Sell, or Hold?

PTON stock stays as a Hold. After assessing its forward EV/EBITDA valuations and the company’s experiment with a new pricing model, I think the risk-reward for Peloton is relatively balanced which justifies a Hold rating.