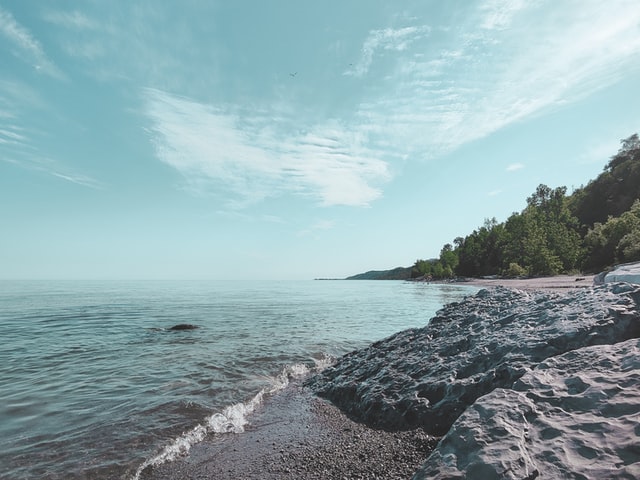 Toronto – In response to the growing awareness of microfibre pollution being discharged in our wastewater, a group of organizations focused on protecting our freshwater resources are calling on all Ontario provincial parties to support action to mass-scale washing machine filters to address this pressing environmental issue.

Organizations expressing their support include Georgian Bay Forever (GBF), the University of Toronto (UofT) Trash Team, the Great Lakes and St. Lawrence Cities Initiative, the Georgian Bay Association, and the Severn Sound Environmental Association.  GBF continues to respond to further support we received at a February webinar where out-surveys showed 97% of respondents would take an action to reduce microfibre emissions into waterways.

Microfibres (<5mm) are the most abundant form of microplastics and other human-made particles in the environment. Plastic, cotton and other textile microfibres shed during laundering in the hundreds of thousands per wash. Trillions contaminate the Great Lakes on an annual basis through wastewater effluent. Researchers in the Rochman Lab report microplastics in the guts of nearly every fish sampled from the Great Lakes, with microfibres as the most abundant. They also find their shape and chemistry can cause harm when ingested by aquatic life. Filters have been found to divert up to 89% from one well-understood source: washing machines.

A study published in Nov 2021 by GBF and the UofT Trash Team (in collaboration with the Rochman Lab) revealed that about 60 household washing machine filters can capture up to 9.7 billion microfibers, thereby significantly reducing microfibre pollution in discharged wastewater.

“In our study with GBF, each household washing machine filter was shown to capture an average of 6.4 grams of lint, which diverted an estimated 179,000 to 2.7 million microfibres per week from wastewater,” said Dr. Chelsea Rochman, Assistant Professor at UofT. “When scaled to the approximately 1.2 million households in Toronto, assuming each had a washing machine, the annual microfibre capture could be in the range of 12 to 166 trillion microfibres.”

Today, Ontario Member of Provincial Parliament Jessica Bell will be reintroducing a Private Member’s Bill that would require all future washing machines to be equipped with microfibre filters to protect waterways.

“Currently, there are barriers to mass adoption of effective commercially available washing machine filters including $180 to $220 costs, inadequate space for filters in laundry rooms, and low awareness of microfibre pollution,” says GBF Executive Director David Sweetnam.  “This bill would enable many more Ontario households to reduce microfibre emissions. To get passed, this bill needs your support by writing your local Member of Provincial Parliament. We are asking for thousands of letters to be sent before the end of March.”