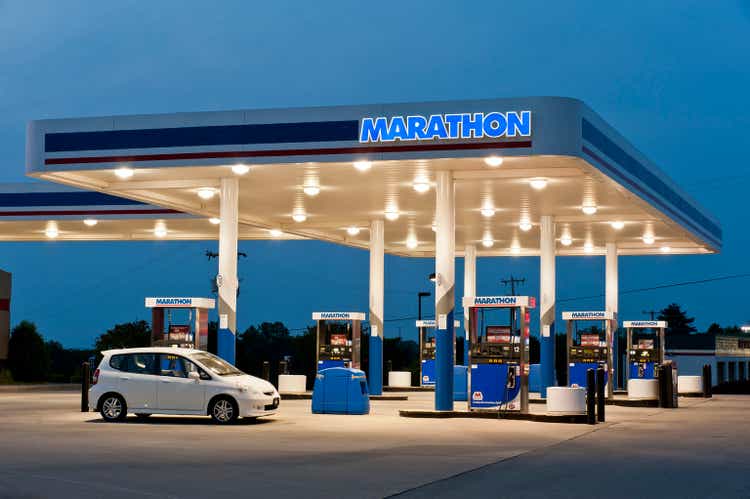 As most of you know, the merger of Marathon Petroleum (NYSE:MPC) and Andeavor in 2018 created the largest US refiner with facilities on the Gulf Coast, the Mid-Continent, and the West Coast. Such a broad and geographically diverse footprint enables MPC to optimize feedstock and export refined products to the global market. Given the relatively low cost of domestic natural gas as compared to much of the rest of the world (and especially Europe), those exports are at a competitive advantage. Meantime, sanctions on Russian oil exports are pushing up the price of diesel in many parts of the world – another tailwind for MPC. However, despite the relatively bullish macro-environment, it would appear that MPC will continue to greatly over-emphasize share buybacks, as compared to dividends directly into the pockets of its ordinary shareholders.

The macro investment thesis for the refining companies is fairly straightforward. After a big drop in refined products due to the pandemic, the “opening-up” of the global economy due to widespread vaccination, Covid-19 treatments, and the general impression that the world is just going to have to learn to live with the virus, has led to a strong bounce-back in demand. Airline traffic has brought back jet-fuel demand, and there is strong demand for diesel in the trucking sector. Meantime, the summer driving season is likely to be huge as pent-up citizens have a strong desire to get out and enjoy life.

Meantime, relatively low feedstock costs in the US continue to favor US refiners. That is especially the case when it comes to producing diesel, since much of the sanctioned Russian oil is heavy crude that has a higher distillate split.

For MPC specifically, Q4 refinery utilization was 94%, and the quarter was led by its Gulf Coast refineries – its largest regional capacity: USGC margin was up $648 million (+40%) as compared to Q3 (see the Q4 EPS report and slide 11 of the Q4 presentation). Other highlights include:

Given the surge in natural gas prices in Europe as compared to the US, MPC can leverage its Gulf Coast production for the global export market. Indeed, on the Q4 conference call, Brian Partee, Senior VP of MPC’s Global Clean Products, said:

Meantime, the Speedway deal is now in the rearview mirror, and the proceeds have – in addition to the big stock buyback plan – enabled MPC to reduce its net debt to capital ratio to 21%. That said, Speedway was a stable source of cash flow and leaves MPC much more dependent on refining & midstream.

Considering the large midstream business MPC has via its MPLX (MPLX) MLP, which pays quarterly distributions up to MPC, the relatively strong price of wholesale propane is another nice tailwind:

As mentioned earlier, MPC is using the vast majority of the $21 billion in proceeds from the sale of Speedway for stock buybacks. As can be seen below, MPC is certainly “Buyback Heavy, Dividend Light”:

Note that in Q4 alone, the $2.742 billion MPC spent on share buybacks was a whopping 7.7x the $354 million the company allocated to the dividend. In my book, the ordinary shareholder is getting short-changed here. That is especially the case, in my opinion, considering that the company is arguably buying back shares during the up-cycle given the 5-year share price chart:

However, I think that is more of a reason to be bullish on PSX at the present time than it is to be on MPC.

MPC’s stock has certainly benefited from the reopening theme, lower relative feedstock costs, and massive share buybacks: the stock has gained 66% over the past year. However, the ordinary shareholder is earning a low dividend while the company greatly over-emphasizes stock buybacks. At this point in the cycle, PSX looks like the better value. Not only is PSX’s dividend yield significantly higher (4.3% versus 2.6%), but PSX’s forward P/E of 10.6x compares very favorably to that of MPC (12.4x). Meantime, PSX is also significantly more diversified than is a Speedway-less MPC: it has a thriving marketing business and, with CPChem (its 50/50 JV with Chevron (CVX)), a world-class chemicals segment as well. Indeed, PSX is now much less dependent on refining than is MPC, with ~50% of normalized EBITDA now coming from its midstream & chemicals segments. That being the case, one would think PSX deserves the premium that the market is awarding to MPC. That being the case, I rate MPC a HOLD.