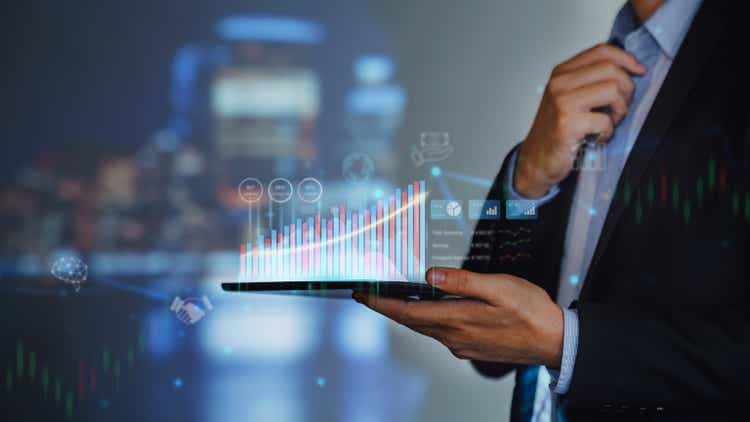 Genmab (GMAB) has been riding high until the recent biotech bear market due to the significant success of Darzalex for which it is receiving hefty royalties from partner Johnson & Johnson (JNJ). And more recently, two additional partnered products have been approved and are already or about to become blockbusters – Horizon Therapeutics’ (HZNP) Tepezza and Novartis’ (NVS) Kesimpta, although the royalty rates on these two products are lower.

Genmab has also been busy expanding its pipeline and has slowly been gravitating towards an approach with better economics but also greater responsibility. The newer deals with Seagen (SGEN), AbbVie (ABBV), and BioNTech (BNTX) generally have 50:50 profit-split terms and Genmab is co-developing and is, or will be, co-commercializing these products.

The stock is not exactly cheap at approximately 36 times this year’s EPS estimate, but the EPS is understated due to the increasing investments in the commercial infrastructure and pipeline that should pay off significantly in the long run.

Genmab is a royalty powerhouse

Investors always get excited about partnership deals and big potential payouts, but Genmab is one of the rare companies that will fully monetize an asset. It has already received $910 million in development, regulatory, and sales milestones and there are only $105 million in further payments remaining. The tiered royalty rate is between 12% and 20% and net sales have already significantly exceeded the highest $3 billion threshold.

Genmab stands to receive between $1.1 billion and $1.2 billion in Darzalex royalties this year and this is after the negative adjustment from partner J&J. Genmab recently lost the arbitration to J&J, confirming J&J’s lower royalty obligation due to the development of the subcutaneous version of Darzalex called Darzalex Faspro (it was originally an IV-administered product) because J&J has to pay a mid-single-digit royalty to Halozyme (HALO) which helped develop the subcutaneous Darzalex.

Genmab has given up on the appeal and has instead decided to start a new arbitration process because the prior arbitration’s ruling states that Darzalex Faspro constitutes a new licensed product under the license agreement. As such, Genmab is seeking an award of $405 million plus interest accrued and a declaration that it is entitled to a new 13-year royalty term from the date of Darzalex Faspro’s first commercial sale.

The outcome of this arbitration is by no means critical to Genmab’s success and only represents some financial upside from Darzalex.

In addition to Darzalex, Genmab is receiving royalties on net sales from three additional partnered products:

And these estimates do not include other partnered products like Rybrevant or candidates like teclistamab and talquetamab.

Thanks to the increasing royalties, Genmab is already a profitable company and is using the profits to expand its pipeline and, more recently, to build out its commercial infrastructure.

The commercial infrastructure buildout has started with Tivdak, which it is co-promoting with Seagen for a 50-50 profit split in the United States, Europe, Japan, and China, and Seagen will commercialize Tivdak in other markets and Genmab will receive royalties on net sales ranging from the mid-teens to the mid-twenties.

Tivdak received FDA approval in September 2021 for the treatment of recurrent or metastatic cervical cancer with disease progression on or after chemotherapy. Tivdak is off to a decent start with $6.1 million and $11.4 million in net sales in the first two quarters on the market, but it is unlikely to be one of Genmab’s larger products. Better sales growth could come from Tivdak’s expansion into the first-line treatment of cervical cancer and potentially in other indications – Seagen and Genmab are evaluating Tivdak in a solid tumor basket trial, as monotherapy and in combination with pembrolizumab (Keytruda) and cisplatin or carboplatin.

The more promising candidate, in terms of peak sales potential, is epcoritamab, which Genmab is co-developing and will co-promote (if approved) with AbbVie in the United States and Japan. Epcoritamab is part of a broader collaboration signed in 2020 when AbbVie paid $750 million upfront with the potential for Genmab to receive up to $3.15 billion in additional development, regulatory, and commercial milestones for all programs and tiered royalties between 22% and 26% on net sales of epcoritamab outside of the United States and Japan. In the U.S. and Japan, the parties will share the pre-tax profits on a 50:50 basis. In addition to epcoritamab, the deal covers three additional product candidates.

Epcoritamab is a bispecific antibody created using Genmab’s DuoBody technology. It is designed to target CD3, which is expressed on T cells and is part of the T cell receptor signaling complex, and CD20 which is a clinically validated therapeutic target. Epcoritamab is in development for multiple B-cell malignancies.

Epcoritamab generated strong data in the phase 2 trial in large B-cell lymphoma (‘LBCL’) patients with deep and durable responses with an overall response rate (‘ORR’) of 63% and a complete response rate (‘CR’) of 39%. These patients have previously received at least two prior lines of systemic anti-lymphoma therapy. The results are slightly better in patients previously treated with chimeric antigen receptor (‘CAR’) T-cell therapy – 69% ORR and 42% CR versus 54% and 34% ORR and CR, respectively, for patients previously treated with CAR-T.

Durability looks strong as well with the median duration of response (‘mDOR’) estimated to be 12 months after a median follow-up of 10.7 months while the mDOR was not reached for patients with a complete response with 89% still being in complete response at nine months.

This is a competitive field with Roche (OTCQX:RHHBY), J&J, and Regeneron (REGN) developing their own bispecifics. Roche’s glofitamab achieved a 51.6% ORR and a 39.4% CR rate in DLBCL patients with the majority of CRs being durable and ongoing at 12 months. Cytokine release syndrome rates seemed higher with a 63% occurrence and a grade 3 or higher incidence of 3.9%. With the caveat of cross-trial comparisons, epcoritamab seems to have a slight edge over glofitamab.

AbbVie and Genmab intend to engage regulators about the possibility of filing for accelerated approval based on the data epcoritamab generated to date and epcoritamab could hit the market as early as 2023. And this could be just the first indication as the two companies are running five trials in other B-cell malignancies including diffuse large B-cell lymphoma, follicular lymphoma, mantle cell lymphoma, and chronic lymphocytic leukemia. If successful, epcoritamab could become a multi-billion-dollar drug and AbbVie is the perfect partner given its presence and expertise in hematologic malignancies with two blockbuster products Imbruvica and Venclexta.

There are five additional clinical candidates in earlier-stage development as shown in the pipeline slide below.

It is too early to pass judgment on any of these candidates at the moment, but GEN3014, a HexaBody targeting CD38 looks very interesting and is a potential improvement over Darzalex. In preclinical models of hematological malignancies, GEN3014 demonstrated “highly potent complement-dependent cytotoxicity and showed potent antitumor activity.” It was also consistently more potent than Darzalex in samples from Darzalex-naïve patients. At the recent Goldman Sachs presentation, the company mentioned that the improved potency over Darzalex could expand the use of GEN3014 beyond multiple myeloma and into DLBCL where Darzalex was not successful, and also to acute myeloid leukemia and maybe even into solid tumors and autoimmune diseases.

Genmab is well-positioned for long-term growth. The royalties from partners are helping the company build its internal pipeline and it has started to build out its commercial infrastructure and is taking an increasing share of the profits of the products it is developing. There is still room for substantial royalty revenue growth in the following years, but the next phase of growth will come from the shared products and candidates like Tivdak and epcoritamab.

Genmab is generating positive cash flow and it has a strong balance sheet with nearly $3 billion in cash. The company has no need to raise cash and it also has the flexibility to acquire or in-license product candidates and expand its pipeline through business development activities.