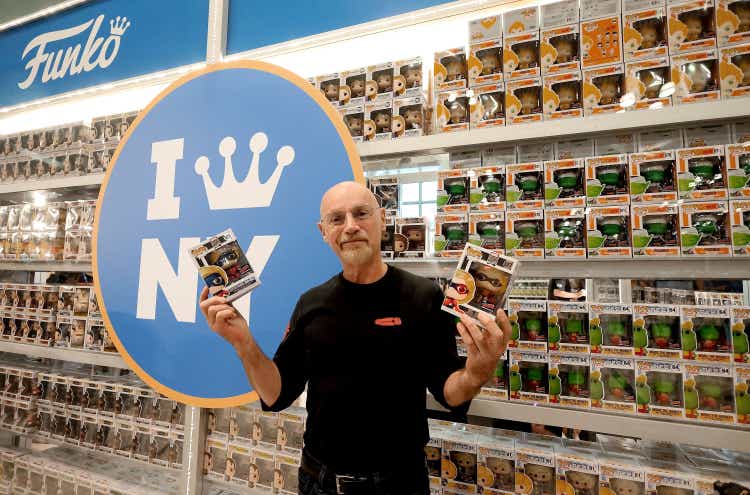 At this time, pop culture company Funko (NASDAQ:FNKO) is the largest holding in my portfolio. Needless to say, I have a lot at stake in the firm’s future. This was why I was confused when I saw the market’s reaction to what was genuinely a really robust quarter that the company just reported on when it released results on August 4th. Sales came in stronger than anticipated and the current forecast for the 2022 fiscal year is looking better than ever. All those shares of the company are no longer as cheap as they once were, they are still very affordable for a business that is growing at a rapid pace. So while the current downturn being experienced by the stock is painful, investors who believe in the future of the firm would be wise to consider using this as a buying opportunity.

After the market closed on August 4th, the management team at Funko announced financial results covering the second quarter of the company’s 2022 fiscal year. For the most part, the data came in really well. Consider, for instance, revenue. Sales for the quarter came in at $315.7 million. That’s 33.7% above the $236.1 million the company reported just one year earlier. Thanks to the strong increase in revenue, results for the first half of the year are very strong, with revenue of $624.1 million translating to a year-over-year increase of 46.7% compared to the $425.3 million generated in the first six months of 2021.

This rise in sales for the latest quarter was driven by strength across the board. The Core Collectible Brands category saw revenue jump by 21.3% year over year, climbing from $192.1 million to $233 million. Even more impressive was the Loungefly Brand category. Revenue here skyrocketed by 114.3%, shooting up from $32.7 million to nearly $70 million. And the sales associated with Other Brands grew by a more modest 11.6%. It’s also worth noting that the company’s direct-to-consumer sales jumped by 26% year over year, indicating that the future for this part of the business should be quite appealing. And also, it should be said that revenue growth was particularly strong in the U.S. market, with sales shooting up 41.7% compared to the 21.8% rise experienced in Europe.

When it comes to profitability, the picture was somewhat mixed. Net income in the latest quarter came in at $14.7 million. That’s up only marginally compared to the $13.8 million reported for the second quarter of 2021. Operating cash flow went from $33.9 million down to negative $7.1 million. If we adjust for changes in working capital, however, it would have fallen more modestly from $34.5 million to $34 million. And finally, EBITDA for the company dropped from $41.1 million to $31.8 million.

Although some of these profitability issues might be difficult for investors to digest, management doesn’t seem to be worried. In fact, the company has only increased its guidance. For the 2022 fiscal year as a whole, the firm now expects revenue of between $1.30 billion and $1.35 billion. That’s up from the prior expected range of between $1.275 billion and $1.325 billion. At the midpoint, this translates to an extra $25 million in sales. It’s also between 26% and 31% higher than what the company generated in 2021 and compares favorably to the $1.31 billion in revenue that analysts have been expecting for the year. To aid growth, management had a number of interesting developments to share. For instance, on the collectible gaming side of the equation, the company is expanding its collectible gaming portfolio with a new product called Disney Kingdomania that is built on some of the most popular Disney (DIS) and Pixar characters. When it comes to the Digital Pop! NFT business, management expressed that there was considerable enthusiasm growing from market participants. For instance, their DC Comics NFT drop saw nearly 0.5 million fans in queue while the Scooby-Doo and My Little Pony drops both sold out in under 30 minutes.

On the profitability side of things, the company now expects EBITDA of $193.45 million. This is based on midpoint guidance. Prior expected guidance was $189.8 million. Using that same approach, adjusted net income should be around $104.55 million. That stacks up against the $101.2 million management previously anticipated. No guidance was given when it came to operating cash flow. But if we assume that the adjusted version of this changes at the same rate that EBITDA will, then we should anticipate a reading of $126.3 million. Of course, management did mention one caveat here. And that was that current guidance is based on what management describes as the current demand environment and it assumes that the company doesn’t experience a deepening of supply chain congestion moving forward. This might have some investors spooked since this could be interpreted as a soft warning for investors that the future might not be as bright as currently anticipated.

Thanks in large part to this increase in guidance, shares of the business now look slightly cheaper than they did previously. Using 2022 estimates, the firm is trading at a price-to-earnings multiple of 12.4. This is down from the 29.6 reading that we get if we use 2021 results. The price to adjusted operating cash flow multiple stands at 10.1. That compares to the 13 reading that we get if we use our 2021 figures. And the EV to EBITDA multiple should decline from 10 using 2021 figures to 7.8 this year. To put this in perspective, I decided to compare the company to three similar firms. On a price-to-earnings basis, these companies ranged from a low of 6.8 to a high of 16.9. Only one of the three companies were cheaper than Funko. Using the price to operating cash flow approach, the range was from 4.8 to 13.1. Once again, only one of the companies is cheaper. And finally, using the EV to EBITDA approach, the range is from 4.5 to 11.2. And in this case, just as with the others, only one of the three firms ends up being cheaper.

Based on the data provided, I must say that I was happy with the results reported by Funko. The company remains healthy and continues to increase guidance, even though it did offer investors a word of caution. Shares look cheap on an absolute basis and are near the low end of pricing compared to similar firms. Frankly, I am surprised by the move lower in shares in response to earnings. If anything, the stock deserved to move higher. Overall, however, none of this has stopped me from keeping my ‘strong buy’ rating on the company.