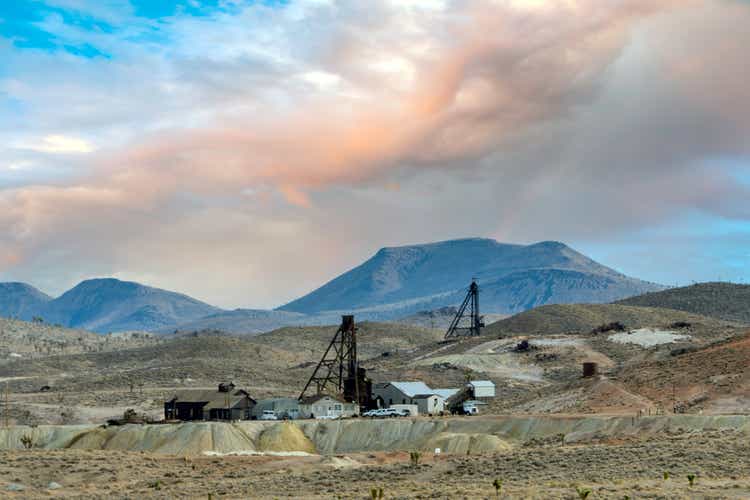 The Q1 Earnings Season for the Silver Miners Index (SIL) starts next month, and one of the first companies to release its preliminary Q1 results was First Majestic Silver (NYSE:AG). The company saw strong growth year-over-year, helped by the newly acquired Jerritt Canyon [JC] Mine. However, consolidated production did fall sharply vs. Q4 2021. The good news is that production will improve as the year progresses, with meaningful growth in consolidated gold production on deck. However, with First Majestic trading at more than 3.0x P/NAV, I still don’t see any margin of safety to justify entering new positions here at US$12.60.

First Majestic Silver released its preliminary Q1 results last week, reporting quarterly production of ~7.22 million silver-equivalent ounces [SEOs], consisting of ~58,900 ounces of gold and ~2.61 million ounces of silver. This was a massive improvement from the ~4.54 million SEOs produced in the year-ago period. The bulk of this growth stems from the acquisition of a new ~120,000-ounce per annum gold asset, the Jerritt Canyon Mine in Nevada. Let’s take a closer look at the quarter below:

Looking at the chart below, we can see that SEO production increased sharply on a year-over-year basis but did see a meaningful step down vs. Q4 2021 levels, sliding more than 14% to ~7.22 million SEOS (Q4 2021: ~8.56 million SEOs). The decline in production was related to lower throughput at its Mexican operations, which were affected by elevated absenteeism levels in early Q1 due to COVID-19. Fortunately, this didn’t lead to much of a decline at Santa Elena, which is benefiting from a higher proportion of mill feed from its higher-grade nearby Ermitano Mine that’s now in production. However, it did put a sharp dent in output at its other two Mexican operations.

First Majestic noted in its prepared remarks that it has begun construction of the LNG powerplant expansion and powerline at Santa Elena, providing low-cost clean power to the Ermitano Mine. This will also support the power requirements for the dual-circuit installations for finger grinding to improve recovery rates. Based on estimated FY2022 production, this asset should produce upwards of 6.6 million SEOs at an average cost of just over $16.00/oz, which would compare favorably to ~5.04 million SEOs in FY2021 at an average cost of $19.20 per silver-equivalent ounce last year.

While this slow start to the year is disappointing, the rest of the year should look much better. This is because the company is out of the winter season, it’s working to ramp up its West Generation underground mine that should begin contributing mill feed by Q3, and it’s successfully connected its SSX and Smith Mines. Finally, it’s also looking to rehabilitate the Saval II underground mine, providing yet another source of mill feed down the road. Between more effective exploration with an exploration to drift to explore between the two mines, less surface haulage after connecting SSX and Smith, and the ability to exploit the excess capacity at the mill, I remain cautiously optimistic about this asset.

To date, there’s no question that operations at Jerritt Canyon have been high cost and relatively low volume, which might make it very difficult to justify the acquisition. However, with ~1.45 million tonnes of capacity at the mill and just over ~900,000 tonnes (63%) of capacity currently being used, there is an opportunity to increase production meaningfully at little extra cost. After increasing the denominator and optimizing the asset, this should help to improve costs meaningfully at Jerritt Canyon from the $2,048/oz all-in sustaining costs last year and more than $1,500/oz this year.

It’s also important to note that FY2021 was a year of investment with the tailings expansion and roaster upgrades, which made costs artificially high in the period. But, with a higher denominator (production profile), and assuming First Majestic is successful in filling the mill, we could see production increase to more than 185,000 ounces by 2024 with all-in sustaining costs closer to $1,400/oz, assuming inflationary pressures don’t worsen sector-wide. While this would still represent above-average costs relative to an estimated industry AISC of $1,200/oz (2023), this asset would still generate meaningful operating cash flow if the gold price can continue to hang out above the $1,850/oz level.

Although the Q1 production figures were disappointing, and First Majestic’s AISC margins are likely to come in below $4.50/oz in Q1, costs and production will improve as the year progresses. This is based on increased contribution from Ermitano, a return to more normal operations in Mexico (less COVID-19 absenteeism), and an increase in processing rates at Jerritt Canyon with the West Generation underground coming online.

As the chart shows, this is expected to push gold production up by more than 40% year-over-year if First Majestic can meet its guidance mid-point of ~273,000 ounces. This would more than offset the low single-digit decline in annual silver production. Assuming Jerritt Canyon’s optimization is successful, it should help maintain gold production above the 270,000-ounce mark for the foreseeable future. The key, however, will be continuing to extend the mine life at First Majestic’s San Dimas Mine and its short mine life at La Encantada because, otherwise, the higher gold production will be partially offset by declining silver production.

As it stands, San Dimas has a mine life of fewer than five years based on reserves and an assumed ~950,000 tonnes per annum throughput rate. Meanwhile, La Encantada has a mine life of barely two years based on reserves, which is quite short. I am confident that First Majestic can extend mine lives past 2026 and 2023 at these two assets, respectively, but the key will be if new reserves can be added at similar grades. If grades cannot be maintained though, we could see slightly lower production and at higher costs.

Based on ~266 million fully diluted shares and a share price of US$12.60, First Majestic trades at a market cap of ~$3.35 billion. This figure dwarfs my estimate of the company’s combined Project After-Tax NPV (5%) of ~$1.0 billion. It’s worth noting that this does not include any potential impacts from the tax dispute with the Servicio de Administracion Tributaria, the revenue service of the Mexican Government. Hence, even without factoring in any potential negative impacts from this dispute, the stock trades at over 3.0x P/NAV. This is a steep price to pay for any precious metals name, even if it benefits from higher leverage due to its silver exposure.

In fact, if we compare this valuation to more diversified and higher-margin names like Barrick Gold (GOLD) and Agnico Eagle (AEM) or higher-margin silver companies like Hecla (HL), First Majestic trades at more than twice the average P/NAV multiple of these peers. This doesn’t mean that the stock can’t go higher, and this net asset value may be undervaluing Jerritt Canyon, given that I have not assigned much value until we start to see the fruits of the optimization work. However, as it stands, and with a relatively short reserve life at two of its assets, First Majestic ranks high on growth but low on value.

Shifting to the technical picture above, this confirms that we haven’t hit a low-risk buy zone yet, with First Majestic sitting in the upper portion of its trading range, even after its recent pullback. This is based on the fact that the stock has $1.75 in potential upside to its newly confirmed resistance level of $14.20 – $14.35. Meanwhile, the stock has roughly $2.95 in potential downside to its support at $9.65. The result is a current reward/risk ratio of 0.59 to 1.0, which is well below my buying criteria.

Generally, when it comes to mid-cap producers with average or below-average jurisdictional profiles, I prefer a minimum reward/risk of 4.5 to 1.0 to justify entering new positions. Hence, for First Majestic to drop into a potential buy zone, the stock would need to slide below $10.35. At these levels, I would still not see a conservative backdrop from a valuation standpoint, given that I see a conservative fair value for the stock below US$9.00. However, I would view this as a decent entry from a swing-trading standpoint.

First Majestic Silver had a slow start to the new year, but as guidance shows, the company is set to grow production meaningfully in 2022. So, while it’s easy to get hung up on the Q1 results, I think it’s better to look at the big picture, which is higher production and solid exploration upside at Ermitano/Jerritt Canyon. Having said all that, I see a conservative fair value below $9.00 for First Majestic Silver, making it hard to justify owning the stock from an investment standpoint. So, for me to get interested in the stock, I would need to see it dip below $10.35 per share, where it would enter a buy zone from a swing-trading standpoint.