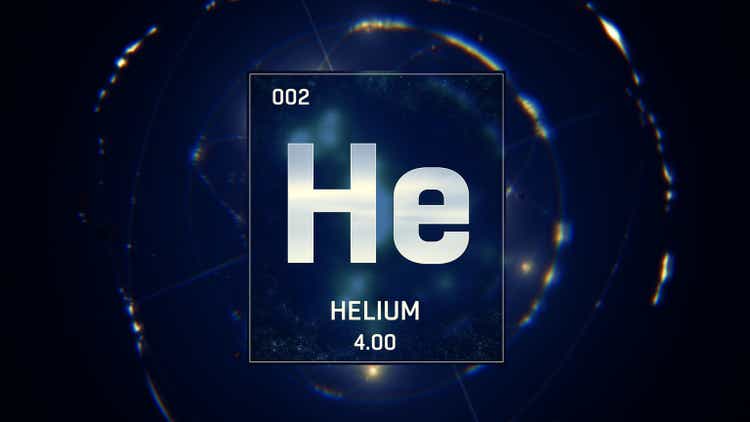 I’m going to make the premise of this article really easy in four points.

First, the world is experiencing a helium shortage and Desert Mountain Energy (OTCQX:DMEHF) might be the ticket to play this looming crisis.

Second, A large percent of the worlds neon production just stopped via the Ukraine-Russia war. Some sources place this at 50% of worldwide neon production, while others peg it at 90% (if looking at semiconductor grade neon). Guess who found neon gas in wells. Answer: Desert Mountain Energy.

Fourth, insider purchases can be a key event to watch and DME insiders are getting rather frisky in executing options, warrants, and even buying stock in the open market. We will cover this in detail in the article.

Helium is going through an abrupt and intense shortage and prices are skyrocketing. The CGA (Compressed Gas Association) does a splendid job of bringing the situation to light via:

Those are some rather large figures for one facility that has been shut down for some time and continues to be shut down; with closure slated for September. This bodes well for a continued rise in helium prices. With DME’s production facility estimated operation in late summer to fall this could have quite the positive impact on the company.

Realize that Russia is not a major player in helium at this moment, but they do have a presence and helium is currently in short supply. Do note they have a rather large helium project in the works that has suffered a series of explosions and fires. Once repaired and barring further mysterious explosions, Russia could become a major player in the helium market.

Some sources think Russia could become a big player in Helium, per Gazprom (OTCPK:OGZPY)

Granted, besides the sanctions, Gazprom did have a fire at its Amur natural gas processing facility on October 8th and a follow up fire/explosion on January 5th. Estimates are this plant will not return online for at least six months to a year at the earliest, with “plentiful supply” pushed out to 2023. I suppose it is plentiful if you are China and doing business with Russia. On other hand sanctions might be lifted by the time Gazprom repairs the plant.

Then again how far might sanctions push repairs out if you are unable to get key parts? It is anyone’s guess, but I would not bet on Russian helium coming online for some time.

Ukraine produces quite a bit of neon. Figures range quite a bit from 50% of world neon production all the way to 90% (used in gas-phase lasers). Various sources say this will impact semiconductor production.

TSMC (TSM) has stated they have a backup stock of neon but how long can that last if this continues for some time? Can Airgas Inc (ARG) somehow adapt? I doubt it. The point is we have a wild card if DME decides to expand into neon production, as neon was discovered in various wells they dug. Frankly I like the idea of it as it would diversify revenue streams so the company would not be solely dependent upon helium be it Helium-3 or Helium-4. Granted this would incur additional costs for the production plant that is being built out. A good primer on Neon can be found via this video.

Concerning Hydrogen, it appears the company is just going to leave it in the ground for the moment. I suspect the rather obvious focus is on helium. However, this might be a future potential revenue stream and a source for “free” energy for the company moving forward. If anything, the logo change from a sun to a pilot light (aka a flame) might be a long-term indicator of an alternative revenue stream given that helium is inert while hydrogen is not. Observe the old vs new logo. Do note that helium is not flammable while hydrogen is.

Consider it something to keep an eye on.

A picture is worth a thousand words. Per the DME IR slide deck:

As we can see offset well #5, #6, and #7 have been completed. It is interesting to note the “End user contracts announced” graphic on the top left. Makes you wonder who is going to start securing helium supply soon.

After this we can see the Helium production facility starting construction and hopefully wrapping up by July-August. Personally, I think Murphy’s Law will prevail and this will slip a few months, but that is not a large issue. Once DME proves it has a revenue producing operation that will change the entire dynamic of the stock and frankly it will attract institutional investors. With all the above news of new wells, new discoveries, and various news events causing a helium shortage, insiders at the company are taking notice.

When stocks are cheap and insiders are buying, I sit up, take notice, and point like Rick Dalton. Take for example retired Judge and recent addition to DME’s Board of Directors Weldon Stout. This gentleman has been on a buying spree as of late in the open market.

Of course, he is not the only one buying DME stock. CEO Robert Rohlfing has been busy as well via warrants and option executions. We can see he spent $216,000 using his warrants and $126,000 exercising options.

Also. per the Annual Meeting forms we can see that Robert Rohlfing now owns over four million shares. This represents 4.8% of the stock.

With the National Helium Reserve shutting down and Russia helium failing to come online we are seeing the helium shortage continue. Neon might be a wild card for Desert Mountain Energy given the situation in Ukraine.

Insiders exercising options, warrants, and buying stock (in the open market) is a very positive sign. The next hurdle will be waiting for the production plant to come online in late summer to fall. Of course, it will require a period to ramp up production, but we should see revenue by January if not before. Hence Desert Mountain Energy might be a good speculative addition to your portfolio if one is patient.