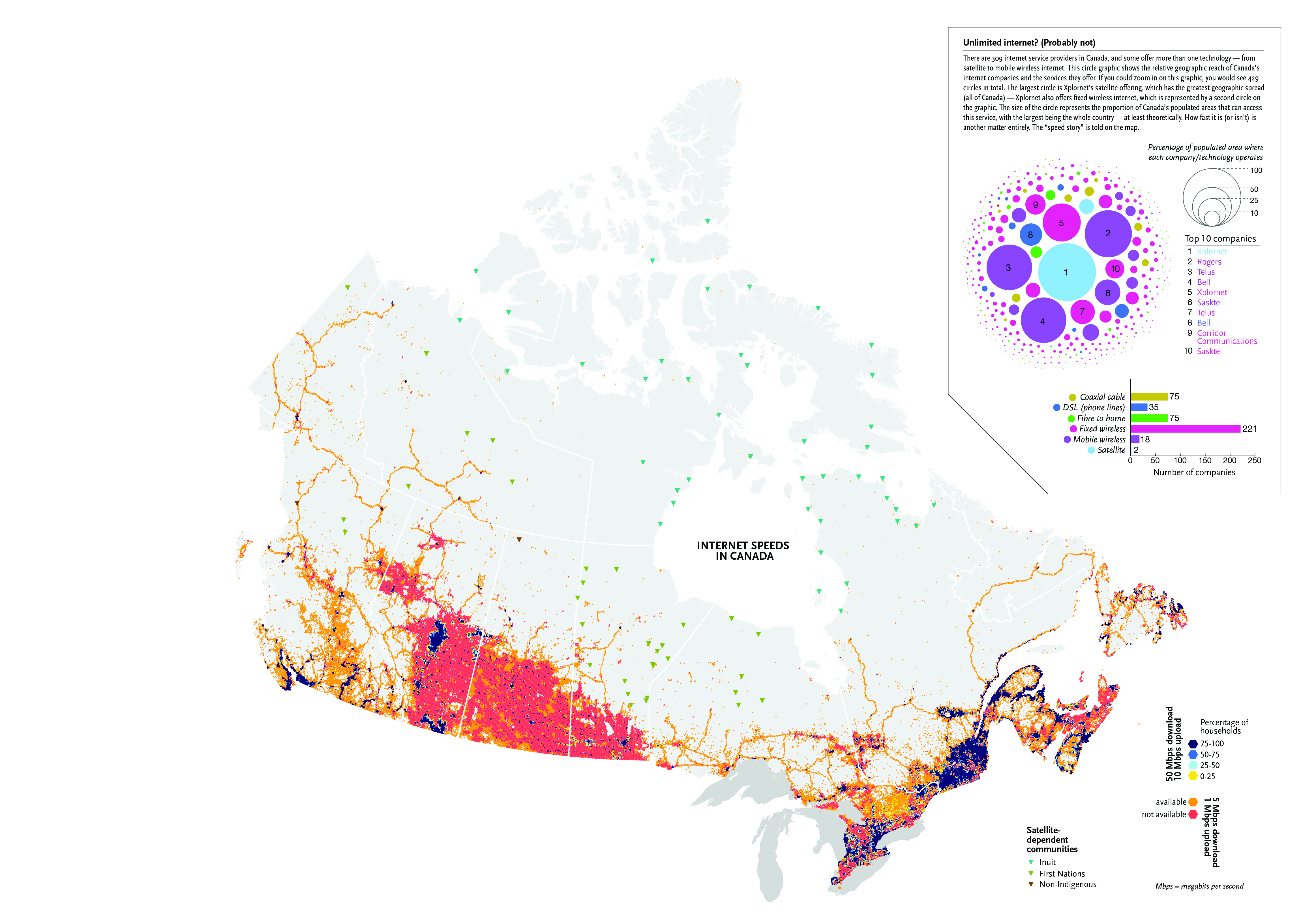 Ossie Michelin is an Inuk journalist who grew up in North West River, right next to Goose Bay in Labrador. It’s a small, remote town — population 550 — and the internet access was wretched. When Michelin would try to upload a three-minute video segment he’d created for APTN, it would take almost an hour. “It was just barely fast enough to work,” he sighs. He recently moved to Montreal, though, where internet connections are lightning-fast. Uploading the same file now takes “about 10 seconds,” he laughs.

That is, in a nutshell, the story of Canadian internet access: a rural-urban divide. This map shows the internet speeds Canadians enjoy — or endure. Cities and more densely populated regions enjoy fast, fibre-optic broadband; rural areas and the, largely Indigenous, North get sludgy, expensive signals.

Why the divide? Economics and geography. Canada’s densely populated areas are profitable for telecom firms like Bell or Rogers; sparsely populated rural regions aren’t. Meanwhile, Indigenous communities in the North are forced to use slow, and brutally expensive, satellite hookups. (With little in the way of roads or rail, telecom logistics in the North are punishing: When the firm SSi Canada brings in new satellite dishes to Nunavut, it has to disassemble them into pieces small enough to fit the little planes that land on Nunavut’s short airstrips.) In a world that’s increasingly communicating via technologies like Zoom, slow connections hurt economies, education and health care, notes Jay Jones, warden for the rural Peterborough County in Ontario: “You can’t do anything anymore without the proper connection.”

What would close these gaps? Better — and more consistent — federal support. Funding to subsidize remote regions does exist, but the programs have been erratically organized, says Erin Knight, the digital-rights campaigner for Open Media, a communications advocacy organization. “The federal government has not stepped up,” she says. Encouraging more competition would help, too; many remote areas have only one or two providers. SpaceX’s Starlink is the most promising new entrant — Canadians are already finding fast signals from its 1,740 low-Earth-orbit satellites. Whether it’s internet from space or in cables running beneath the ground, support is needed to close the gap.