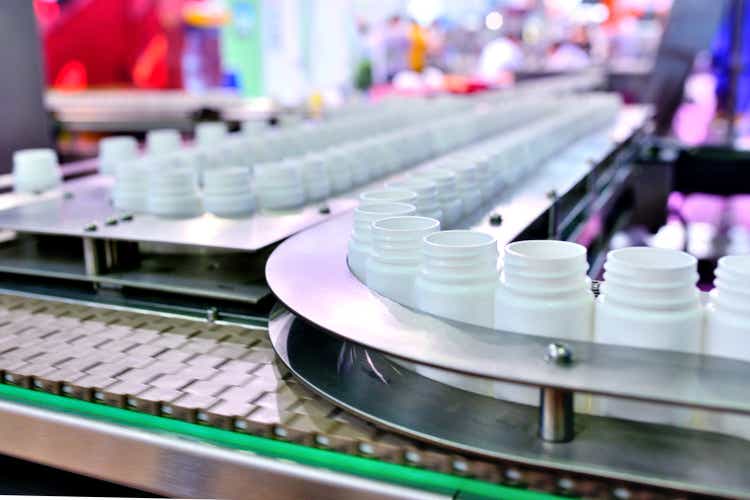 It would be fair to say that controversy surrounds the Alzheimer’s Disease treatment space and that no company within it has escaped criticism.

The blue touch paper was first lit last June when Biogen’s (BIIB) Aduhelm was approved on the flimsiest of clinical evidence, leading other Pharmas – notably Eli Lilly (LLY) and Roche (OTCQX:RHHBY) to attempt to fast-track FDA approval for drugs – Donanemab and Gantenerumab – with the same mechanism of action – namely the removal of amyloid beta deposits in patients’ brains.

Now that the Centers for Medicaid and Medicare (“CMS”) has refused to provide reimbursement at the national level for this drug class, Biogen, Lilly and Roche’s best laid plans lie in tatters – the entire amyloid beta thesis is a busted flush at the present time.

As such, the door opens for challenger biotechs with novel approaches to tackling Alzheimer’s, such as the subject of this post, Cassava Sciences (SAVA), as well as Anavex Life Sciences (AVXL), Annovis Bio (ANVS), Prothena (PRTA), and Cortexyme (CRTX).

Nearly all of these stocks have experienced sensational highs and nerve-shattering lows over the past 12 months, as even if it has so far done little for patients, Aduhelm’s approval has turned the Alzheimer’s drug development sector of the stock market into the ultimate white-knuckle ride for investors.

Cassava has experienced more ups and downs than most, and although its long-suffering yet still bullish CEO Remi Barbier claimed victory last week – after the FDA’s response to a Citizen’s Petition asking for its 2 pivotal trials of Alzheimer’s candidate Simufilam to be placed on hold and the company investigated for fraud – Cassava’s detractors may also feel they have done enough to permanently derail the drug’s path to approval.

In this post, I analyse the FDA’s full response to the petition, provide the relevant background, and speculate about what turn the battle between bulls and bears may take next.

Cassava is arguably the most controversial and talked about of the above-mentioned companies, for both good reasons and bad. After failing a Phase 2b trial back in May 2020, it looked like the company’s lead asset Simufilam’s race was run, but similarly to Biogen, Cassava’s management refused to accept defeat.

When the trial results were later sent to a different lab for re-examination, Cassava revealed that this time, they were positive, with statistically significant improvements reported across a panel of validated biomarkers.

Cassava moved Simufilam – which “works” by repairing misfolded protein Filamin A in the brain, thereby theoretically reducing neurodegeneration and neuroinflammation – into an open-label trial, and the results were apparently outstanding.

The mean change in ADAS-Cog 11 scores (a gold standard measure of cognitive decline in Alzheimer’s patients) was -3.2 at 12 months – which is unprecedented.

If it Sounds Too Good to be True – Perhaps it is?

Cassava’s market cap valuation roared past $5bn, but it wasn’t to last as reporters began asking questions about the scientific rigour of the trial.

Next, a Citizen’s Petition was lodged with the FDA, requesting that 2 planned Phase 3 trials of Simufilam be halted and the agency investigate claims that Cassava had forged documents – from as far back as 2011 – in order to secure its Investigational New Drug (“IND”) approval for Simufilam, allowing it to move the drug into clinical trials.

Although it was quickly revealed that a group of short sellers of Cassava stock were the driving force behind the Citizen’s Petition, the accusations raised some valid concerns – not just in relation to forged documents but also about the use of a lab run by a long-time, paid partner of Cassava’s, Dr. Wang – the very same lab that re-evaluated the failed Phase 2b results and found them to be positive.

Cassava’s share price collapsed overnight, falling to a value of ~$40, and has yet to recover, trading within a range of $35-$50 ever since.

This week, the FDA finally responded to the Citizen’s Petition – and on the face of it, it seems to be good news for Cassava. After listing the various requests made by the petition, the FDA states its position as follows:

your Petitions do not purport to set forth all relevant factual information. Rather, you call on FDA to initiate an investigation and fact-finding process.

We are denying your Petitions to the extent that they request, through the citizen petition process, that FDA initiate an investigation. Under § 10.30 (21 CFR 10.30), citizen petitions can request that FDA issue, amend, or revoke a regulation or an order, or take or refrain from taking an administrative action, and are to be resolved based on information in the administrative record.

In other words, the FDA does not, as a policy, initiate investigations at the behest of a Citizen’s Petition – the responsibility for any investigation would fall upon the petitioners themselves.

Moreover, issuing a response to your requests would appear to require FDA to publicly disclose information about an investigational new drug that, by law, FDA generally cannot publicly disclose….the Trade Secrets Act, 18 U.S.C. 1905, prohibits the disclosure of confidential commercial information unless doing so is authorized by law.

FDA’s regulations regarding confidential commercial information provide that if the existence of an unapproved application has not previously been publicly disclosed, “no data or information in the application . . . is available for public disclosure.”

In other words, the FDA does not disclose details from an Investigational New Drug application to outsiders.

And finally, in response to a request that it reports its findings to “interested law enforcement and regulatory authorities”, the FDA responded:

Decisions regarding enforcement actions are made on a case-by-case basis and are within the discretion of FDA. Requests for the Agency to initiate enforcement action and related regulatory activity are expressly excluded from the scope of FDA’s citizen petition procedures.

Translation – thank you for inviting us to contact law enforcement, but we will make that decision at our own discretion.

The Petition Successfully Torpedoed Cassava’s Rising Share Price – But Will it Cause Long Term Damage?

Based on the above excerpts from the FDA’s response, you may think that Cassava has been cleared of any wrongdoing in the FDA’s eyes and is now free to complete its Phase 3 trials – which the petition had demanded were stopped – moving a step closer to an approval for Simufilam.

Cassava and its CEO Barbier seemed to think so, issuing a statement in response to the FDA’s comments:

The news is very welcome but not surprising…we said from the outset that the allegations are false. I think the message may be that the FDA’s citizen petition privilege is not to be trifled with by stock market participants.

And yet, the final statement in the FDA’s response letter to the petition may have sent a shiver down Cassava’s spine and perhaps those of its investors also:

We take the issues you raise seriously. Please note that your Petitions are being denied solely on the grounds that your requests are not the appropriate subject of a citizen petition. This response does not represent a decision by the Agency to take or refrain from taking any action relating to the subject matter of your Petitions.

The inference here may be that the FDA does not regard the Citizen’s Petition as entirely without merit – rather that protocol means it is unable to respond to it in any meaningful way, i.e., by taking instruction from Labaton Sucharow – the lawyers who instigated it on behalf of short sellers – or initiating an investigation at the lawyer’s request.

But could the FDA subsequently launch its own independent investigation? To date, the FDA has provided strong support to Cassava, signing off on its 2 pivotal phase 3 trials, details of which are below.

These trials were initiated in the second half of last year, and as we can see, involve ~1,750 patients with mild to moderate Alzheimer’s Disease and will last 12 and 18 months respectively, with the co-primary endpoints being ADAS-COg and ADCS-ADL scoring.

Although it seems unlikely that the FDA will place a hold on these trials, it is certainly not inconceivable either.

Cassava is currently under investigation by the Securities and Exchange Commission (“SEC”) and also by the National Institutes of Health (“NIH”) – which has formerly provided a $20m grant to Cassava to assist with its research into Simufilam.

It’s likely that if the SEC, NIH, or FDA discovers that it has been duped by Cassava, they will have no hesitation in punishing the company as severely as possible.

The FDA’s reputation has already been dragged through the mud as a result of its decision to approve Biogen’s Aduhelm, and the agency has been humiliated by the CMS’s subsequent decision to opt out of providing reimbursement.

Cassava represents a much easier target for the FDA than Biogen, being much smaller – and frankly, the FDA needs to send a clear message to all Alzheimer’s drug developers that data manipulation of any kind will not be tolerated – whether it be blatantly misleading, or a re-reading of data from a failed trial that suddenly suggests a key endpoint was in fact met.

In summary, Cassava – in my view – is not yet in the clear – and that is being reflected in the lack of any decisive share price movement since the FDA’s response to the Citizen’s Petition and Cassava’s own comments.

It’s worth noting that prior to Simufilam, CEO Barbier failed four times to secure an approval for a tamper resistant opioid treatment. With such a track record, it does take a leap of faith to believe that the company is on the verge of delivering an Alzheimer’s wonder-drug that has been beyond the capabilities of any Pharma, despite nearly 20 years of trying.

What is the Play on Cassava Stock Now?

Cassava is a hugely divisive company – those investors who owned stock earlier than 2020 must be beyond delighted with the gains they have realised, but for everyone else holding Cassava stock – there is an intense battle in progress.

According to MarketBeat, the percentage of Cassava’s share float that was sold short as of 15th January was 35%, and amongst the companies that have declared short positions in the stock are Bank of America Corp. (BAC), National Bank of Canada, UBS (UBS), Perceptive Advisors – the biotech VC – and Jefferies Financial Group (JEF).

MarketBeat suggests that a company with 20% of its share float sold short indicates “widespread negative sentiment”, so 35% is a high number indeed – the shorts are circling Cassava and anticipate the share price tumbling. The battle between shorts and longs has been bitter at times and has been waged across social media, via government agencies, at academic institutions and inside biotech laboratories.

We may be arriving at the endgame, however, with trial results from the 2 pivotal trials likely to be available before the end of this year. What will they reveal about Simufilam? We still don’t know.

Is this a good time to be buying Cassava stock – if you are an optimist who believes in the miraculous, then there can be no doubt that an approval for Simufilam would catapult Cassava’s share price far beyond its highest peak and into the $10-$20bn market cap valuation stratosphere, then yes, you should continue to build a position.

If you are amongst the cynics who believe that we are no closer to an effective Alzheimer’s cure than we were 20 years ago but have at least been able to discount a number of theses about how it can be treated and cured, then you may have a hard time locating Cassava stock to borrow and sell, but that will likely be the optimal strategy for you.