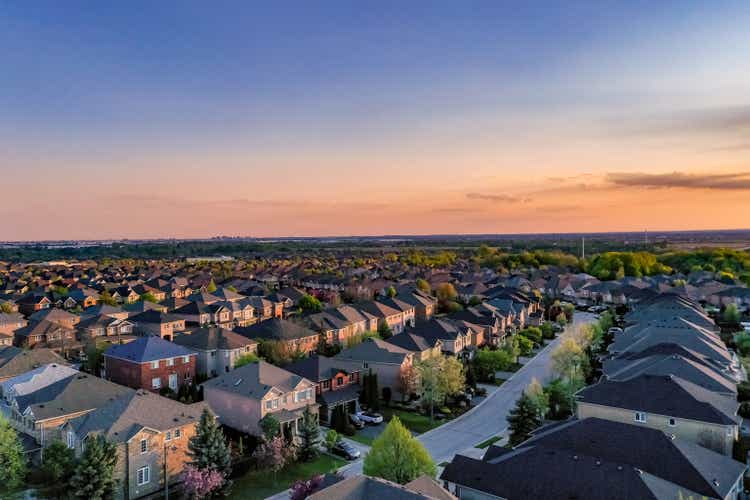 The price of the average Canadian home hit $816,720 in February, its highest level on record (Canadian Real Estate Association).

The $816,720 average selling price is up 20 percent compared to last year’s level. In the most populated areas of the Greater Toronto and Vancouver areas, the average selling price exceeded $1 million. Without these two cities, the national average price was also a record high at $638,720.

The average house price divided by disposable income is a precarious 23 in BC and Ontario (chart below). Many have necessarily given up on homeownership dreams.

Many of those who do own are so indebted that they cannot meaningfully accumulate savings for other critical goals like retirement, education, emergency funds and new business creation. All of this has a long-term economic drag on households and the economy.

After doubling with the oil patch boom from 2004 to 2008, Calgary home prices fell 25% and largely flatlined for 15 years to 2020 (a typical historical pattern that followed past housing booms in Canada and other countries).

Then, over the past year, relative value has attracted inflows (average price in Calgary $487,000 per CREA), and benchmark prices in the city leapt almost 9% in the past three months – the fastest clip since the heady days of 2006.

As with everything, high prices ultimately become the cure for high prices and this credit and speculation-driven cycle is unlikely to end differently than the hundreds that have preceded it globally. Those who lever in late are likely to suffer one way and another.

The value of building permits in Canada hit $11.2 billion in November – the highest ever recorded. New private housing units under construction in America hit a 49-year high in January, with 1.543 single- and multi-family units in process – the most since 1973.

Population-adjusted this matched the peak of the U.S. 2004-2007 building frenzy. In January, the 1.899 million U.S. building permits were also the highest since December 2006.

Bank of Montreal economist Robert Kavcic noted last week: “Demand has been boosted by expectations of rising prices and a last-ditch effort to lock in cycle-low mortgage rates. But sentiment can change in a hurry, and this market could find balance very quickly the moment that it senses softer prices.”

Editor’s Note: The summary bullets for this article were chosen by Seeking Alpha editors.